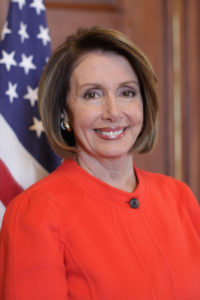 “I think that, so many times, white — non-college-educated white males have voted Republican. They voted against their own economic interests because of guns, because of gays, and because of God, the three Gs, God being the woman’s right to choose,” Pelosi told PBS’s Judy Woodruff in an interview Wednesday…

Now, let’s be clear. This article is not about the virtues of Trump.They’re hard to find. This is not about voting Republican. It’s not even about the three “G”s at this time. It’s about education. I have a very hard time stomaching it when people imply that it’s a lack of education that makes people believe that what’s living and moving and beating and feeling and pulsing in the womb…is life—human life. Even a cursory investigation of what’s happening inside the womb—even a smidgen of education about that—makes any reasonable person know that abortion kills human life. Even Hillary Clinton recently as much as admitted that, assigning personhood to the unborn, when she said “The unborn person does not have constitutional rights.”

We are just stubbornly behind on the learning curve when failing to admit that a developing baby in-utero is alive. It strikes me that uneducated people often like to talk about the ignorance of others. Nancy Pelosi, in spite all of her education, is showing her ignorance about all three of the “G”s. But her amazing criticism of “non-educated white males” who believe there’s life in the womb is a leap of self-exaltation beyond belief. It’s a transparent attempt at intimidation to those who believe that the Bible is the inspired Word of God. I wish I had a dollar for every time I’ve heard the word “backward”, “Ignorant” or “uneducated” to refer to those who believe in the Creator and to those who believe there’s life in His image in the womb. There’s a great deal of evidence to support both and, perhaps, the adjectives more aptly apply to those who have failed to examine that evidence.

It’s sad that Ms. Pelosi chooses to equate “God” in her quote to “the woman’s right to choose”. I don’t think that’s what she really meant to say there. She meant “God” to the “uneducated” is fighting for lives within wombs in America. Of course, fighting for reborn life is a given to those who believe there’s a body and soul in His image in a pre-born baby. But that battle is only one consequence in the lives of those who have evidence-based faith in the Word of God. It’s a systematic way of doing life…a decision-maker that brings accompanying fulfillment and hope to believers.  Nancy Pelosi cannot understand. Donald Trump cannot understand. Hillary Clinton cannot understand.

But in this election year, the Christian is necessarily saddened to see the eternal values of the Creator trampled  in such public arenas. The Christian must decide how Christianity can best be reflected and promoted at the polls and act accordingly. The Christian must then go on living, deciding, acting, judging and raising the next generation based squarely on the principles of the Word. Finally, the Christian has faith that, no matter what happens in the USA, her citizenship is unshakeable. We are secure in the knowledge that His kingdom is eternal. He is fully in control of the country of our primary citizenship. The world can try to intimidate, but it cannot have our hope!