Posted on April 21, 2011
0 Flares 0 Flares ×
I’m a little surprised and a lot saddened that I am hearing (and reading) gospel preachers and elders who think we should not teach young people to avoid the 2011 prom. I hope these guys are using better logic on other risky behaviors than on this subject. Here’s the defense of the activity: “My daughters went to their proms and they turned out okay.”
Here are some true statements I could make about my own two children. (The fact that these are true statements does NOT mean that I would encourage your children to do these things):
My son ate dishwasher detergent once and he turned out okay.

My daughter rode in a car through a terrific rainstorm while the driver watched a tv show on his i-phone and she turned out okay.

My daughter played with a friend who sprayed Mr. Clean directly in her eyes and she turned out okay.

My daughter sat for a long time in a dark, desolate subway station in the “bad” part of New York City in the middle of the night with one of her girlfriends and she turned out okay.

My son once diverted his attention when he should have been looking and got hit square in the head with a baseball…but he turned out okay.

You get the point. Very bad logic. Just because your children have grown into reasonably spiritually healthy adults in spite of some risky behaviors does not license thinking parents to endorse such behavior. (In fact, if I as an adult encourage such behaviors, I might be held liable for their consequences.)

I have in recent years heard the sad story of a mom whose twelve-year-old son saw fornication occurring in a dark corner of a chaperoned middle school dance. (That image, unfortunately, will be seared into that kid’s memory for life.) I had a teacher, who was called on to chaperone the prom at her high school, relate to me how a girl’s gyrations on the dance floor caused her to lose her strapless, very low-cut dress, suddenly becoming completely topless in front of much of the student body. I have heard about the after-parties, the drinking and sex. In fact, I was recently in a hotel trying to sleep and prepare for a full schedule ahead while one of these parties was occurring. It was not pretty. I even attended a funeral of a young man who was killed when his car left the road when he was on his way home in the wee hours from a night of prom partying. I can hear some of you saying, “But my prom is not like that.”

Now the works of the flesh are manifest, which are these; Adultery, fornication, uncleanness, lasciviousness, Idolatry, witchcraft, hatred, variance, emulations, wrath, strife, seditions, heresies, Envyings, murders, drunkenness, revellings, and such like: of the which I tell you before, as I have also told you in time past, that they which do such things shall not inherit the kingdom of God.

Without examining the actions, we easily see their consequences. Those who do these things and other clear (manifest) and similar (such like) works of the flesh shall not inherit the kingdom of God. That’s the consequence of doing things that are in the list.

“Lasciviousness” is in the list. What does the word mean? It means “whatever contrasts itself to purity.” It means “debauchery, a profligate lifestyle, activities that incite lust.” It does not mean “fornication”, for fornication is elsewhere mentioned in the same list.

What troubles me most about the word “lasciviousness” in this list and our acceptance of the prom as an innocent cultural rite of passage… our celebration of it, is that Thayer, one eminently qualified scholar on an extremely short list of respected modern Greek scholars, includes these words in his description of lasciviousness: “unchaste handling between males and females, indecent bodily movements.” Pornography would be characterized by one of these two descriptive phrases. Most table-top or pole dancing in bars would have to be characterized by one of these two. XXX rated movies would be necessarily characterized by one of these two. But ladies, the kind of dancing that is most popular at proms around our country today is characterized by both! And fathers of teen daughters in the church today are paying for their daughters to purchase skimpy-topped dresses–dresses that bare both back and cleavage– to participate?! Give thinking people a break!

“Reveling” is also on the list. Reveling means “a carousal, a letting loose.” It means “feastings at which obscene music is played.” It likely has specific reference to some of the feasts of idolatry among the Gentiles of Paul’s day. These feasts were characterized by partying with unclean music, lascivious behavior and often excessive drinking. I don’t know about you, but I think there are many proms around our nation each spring that might aptly be described as “reveling”.

It’s important to remind ourselves as we make daily decisions that the actions listed as “works of the flesh” in Galatians 5 are obstacles in the way of the kingdom. They are roadblocks to heaven.

For this reason the elders in my congregation have asked our teens not to attend the prom. They are kind in their petition, but they are firm in their resolve. Since I have been a part of the West Huntsville family I know of only one of our young people who violated the elders’ request. These godly men lovingly talked with her upon finding out that she had attended. They encouraged her repentance and prayed with her as she did repent. They spared our younger teens the questions about the appropriateness of her decision and about the consistency of the elders in their shepherding. At the risk of boasting about our shepherds, may I say that their loving commitment to help our youth make godly choices in the midst of a culture of subjectivism is extremely refreshing and most helpful to parents and teens who really want to do the right thing?

Prom. It’s probably my least favorite subject to address. I don’t win popularity contests in many churches when I talk to women about the prom. All of the young ladies in a congregation where my daughter was speaking recently missed the ladies’ day activities on that particular Saturday because they “had” to spend the day getting ready for prom. I wish godly adults had made it easier for these girls to grow some spiritual muscles on that day. But instead, the ladies were mostly very excited and extremely unashamed about the “big day” for their daughters…a day that included missing a great time of fellowship and of studying about spiritual priorities…a day that included adult-approved and purchased immodesty and dancing…a day, at best, given over to the culture instead of the Lord. Poor little rich girls! How blessed they would be if parents had enabled them from young and tender ages to choose to step as far away from instead of as close as possible to the temptations of the devil who walks about as a lion seeking to devour them.

P-R-O-M. Sometimes I think it stands for Parents Relinquishing Our Minds! 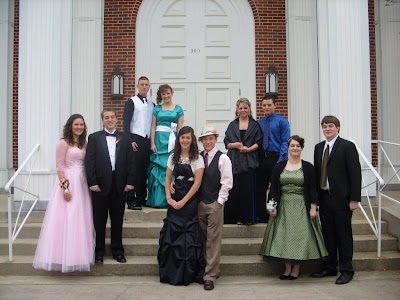 P.S. These girls and guys from Middle Tennessee are blessed with church leaders (as are our West Huntsville teens) who help them avoid temptation by planning a prom alternative—a fancy dress-up night with all of the anticipation and fun and none of the regret! Thanks, Jennifer (middle front) for the photo. Someone remind me of the name of your congregation and your great Bible teacher and I will post them.
Please visit Cindy’s Blog at cindycolley.blogspot.com/

Sister to Sister: God Is not a Robot.