It’s been a great study, thus far. Maybe you’ve done the study and now you would like to recommend it for a ladies class or for a study group. Maybe you just want to get the book for later personal study. Remember, there’s no wrong time to go through any Digging Deep study.

All the podcasts are saved for your use at any time HERE.

SO, get a copy to save right now or, if your ladies class is resuming after the pandemic, His glory is a great topic choice to get it jump-started again. While supplies last, “Glory” deluxe edition study/notebooks are just $12.00 each. Place your order here: CLICK THIS LINK

Here are a few comments by Diggers around the country.. Sometimes people thank me. That’s kind, but I know it’s not me. It’s His providence, His goodness and, most of all, His Word, that makes Digging Deep rewarding!

I am loving how you are leading us through the book of John in our DD study this month. My eyes are being opened to so much that I have been taking for granted in the humanity of Christ.Thank you so very much!

I’ve finished! Thank you for this study of Glory. It was incredible. Cannot wait to start the next one!

We had a big room full of ladies interested tonight! I invited a lady who has been visiting but isn’t a Christian to do it too & she said yes!

Such great studies! At first I thought this takes a lot of time and really focusing and concentrating on the Word of God. And it does take time and focus and study. But what better way is there to learn than spending time studying His Word and drawing nearer to Him and striving to be like Him?
Thanks for motivating us to do just that! ❤️

Cindy Colley on Homeschooling–On Sale for a Limited Time!

Are you a homeschooling mom who’s feeling a bit (or a lot) overwhelmed by the task of choosing curriculum and planning its use for the next school year? Maybe you’ve never homeschooled before and you feel like its the most daunting prospect of your life, so far? I’m hearing this a lot–in private messages and as I peruse mom groups. I’m even hearing it from my daughter!

This book’s for the faint-of-heart homeschooling mom. I’m marking it down today, for a limited time, for all those moms who are getting ready for the most rewarding educational adventure of your lifetime. The curriculum market is constantly changing…broadening (and, in many ways, improving), so this book is not primarily to help you pick out textbooks. This book is to give new home-educating moms (who are Christians) the big picture that builds confidence in ability and clarity of goals. It’s more of a Titus 2 kind of encouragement for God’s woman in the homeschooling home. I want our kids to grow up to glorify Him, above all else. That’s the message of my book about homeschooling. But, in that process of glorification, I also tried, through the book, to offer a lot of encouragement and ideas for making your home a great school; not because I know all the answers, but because I found my God so faithful in providing all I needed to educate our children at each juncture of the journey.

Here’s a little more info in a review I just found while clicking around: https://reneeatgreatpeace.com/book-review-cindy-colley-on-homeschooling-30-days-link-up/

So for the next couple of weeks, Let’s lower the price from $14.50 to just $9.00. That’s a savings of a little more than 30%. So now’s the time…for your own school, for the school your grandkids will be rocking, for the friend who’s struggling with “keeping on.” We’ve got this. With the help of a God who gave us that great Deuteronomy 6, four-times-a-day-principle of homeschooling (and of all schooling), you’ve got this!

And these words that I command you today shall be on your heart. You shall teach them diligently to your children, and shall talk of them when you sit in your house, and when you walk by the way, and when you lie down, and when you rise. You shall bind them as a sign on your hand, and they shall be as frontlets between your eyes.

We surely didn’t always get it right, but we learned a lot along the way. This book is all about bringing up children of faith in a culture of relativism. It’s about helping moms and dads get out of rhythm with the world’s parenting philosophies and back in step with God. It speaks about discipline, developing a work ethic, minding the media and protecting purity. It’s an easy read, but we think it can make an impact for good in your family. We pray it can help your children reach heaven. Here’s an excerpt:

If we as Christian parents will take the time to think for a moment about the window through which we often allow our children to gaze, we surely will draw the shades. If my children were one day looking out my bay window into my front yard and discovered that in the yard across the street two unmarried people were passionately engaged in fornication, I would draw the shades. If my children were looking out and witnessing a stabbing in the street I would close the curtains and call 911. If on a spring day they overheard the shouting of obscenities through an open window I would surely close it. But often in our living rooms, the window is up, the shades are up and the curtains are open. The biggest difference I can see is that they are not watching from across the street or from the inside out. They are watching from the inside in. They can hear and see everything. The pollution of this world has made its way into the approved setting of our living rooms.

Through this window, the average high school senior has seen eighteen thousand murders. Through this window he has witnessed the abuse of alcohol in an acceptable setting tens of thousands of times. He has heard profanities and obscenities when they were shouted and when they were whispered. He has seen the values and the person of his God denigrated and reviled hundreds of times. He has relaxed beside the window for so long that he is no longer shocked at what he sees on the other side.

Dear Christian parents, we cannot afford to allow our children to be average television viewers. Our children need to know that any show that contains profane or obscene language will be immediately turned off. They need to know that we will not watch explicit sexual behavior or blasphemy against our God. In practical terms this means that we watch very little current TV. Almost without exception the shows produced today are saturated with such behavior. Since our television goes off or we switch the channel when such occurs, our family has learned not even to attempt to watch anything currently produced. Our viewing is generally either classic reruns, old movies or educational.

I realize that these viewing limitations will seem radical to families that are a part of a society that has elevated television to be its number one pastime. In I Peter 4:3, several sins are listed. Peter characterizes these sins as the will of the Gentiles. It occurs to me that in America today we could substitute the words “entertainment industry” for the word “Gentiles.” Such sin is the will of the entertainment industry! The next verses have been a powerful influence on my thinking when I begin to wonder if we are being radical with reference to our family entertainment choices.

“Wherein they think it strange that ye run not with them to the same excess of riot, speaking evil of you: Who shall give account to him that is ready to judge the quick and the dead.”

Yes. Some will think it strange. Some may speak evil of you. But certainly what Hollywood produces today is filled with an excess of riot. We as Christians must commit not to run with them for we will surely give an account to Him who is ready to judge the quick and the dead. 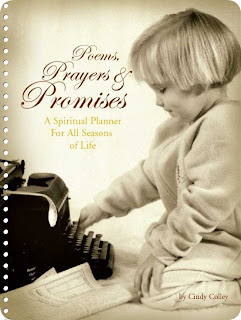 Get your act together this year. Get organized while prioritizing the spiritual. This planner is filled with the spiritual focus you need to do the right things and the order you need to do them efficiently. Alissa uses it for her meal planner and Christa uses it to chart all the first roll-overs, laughs, words, teeth and steps of her baby. Cindy uses it to keep up with a busy schedule and Celine doesn’t use hers at all. She’s just saving it to pass down to her daughter. It’s a prayer list keeper, a Bible study notebook or a baby shower gift. Every opening has the poetry of Cindy Colley. A 52 week planner for any year.