Need a gift for kids of all ages? This is the best of Digger Doug music amped up for kid consumption! Reminiscent of “Schoolhouse Rocks” music, these lyrics defy Darwinian evolution and promote the scientific principle of universal design. Your kids will love jamming to the upbeat music of Digger Doug producer, Caleb Colley (and while they are singing, they’ll be cementing some very important truths about human origins). Apologetics Press always delivers the best building blocks for the case for design and this CD will not disappoint. Since the music is not spiritual, in nature, but rather fun lyrics about the design principle in science, this is an instrumental version with a beat that will rock your road trips! And, for the holidays, it’s offered at a price that will rock your wallet! (Teachers, get an extra special bargain when you buy six for gifts for your Bible school class, or better yet, buy a bunch for your public school class! Great way to spread the good word about origins!)

Digger Doug’s Underground Rocks is not for worship/devotional use.

Join Digger Doug and Iguana Don for a rockin’ treat! Digger Doug’s Underground Rocks, a new music CD from Apologetics Press, is a collection of fun songs about science for kids. Twelve original songs featuring the sounds of a full band. Parents will want their kids to learn the principles that underlie the lyrics of each song, because each of the scientific topics relates to the Creation/Evolution controversy. 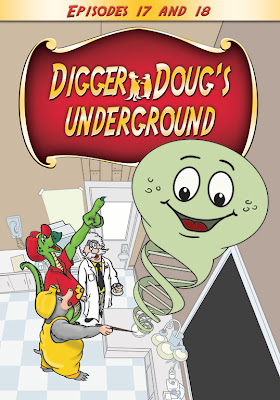 So last night I watched an episode of a funny show. This is really unusual for me, since I don’t have cable or satellite TV, Hulu, or Netflix. But I get a package every now and then from Apologetics Press and, last week, we received episodes seventeen and eighteen of Digger Doug. I guess I’m a little old to be part of the Digger Doug fan base, but I’m a fan. As I watched episode seventeen about the formation of coal, I wished that something like Digger Doug had been available for my kids back in the day. It was the most professional of any episode to date and the music was outstanding. But the best thing about it was the extremely entertaining and  effective way the information was disseminated; information designed to fortify faith in little minds before they even know what faith really is. That’s what parents have to do.
We have to put healthy eating habits in our kids way before they are exposed to junk food. We build immunities in them before they are exposed to deadly diseases. We put integrity in their hearts before they’re tempted to cheat on a test. In similar fashion, we must put faith in the Word in them before they are exposed to the world of academia in which there is a definite textbook agenda to replace any belief in God with a belief in the Darwinian theory of evolution.
I hope you are a mother or a grandmother who takes this responsibility seriously. I, being in between the mom-of-small-kids stage and the grandmom stage (for a preferably short time), am just as determined to help my children fight the humanist agenda in the hearts of my grandchildren as I ever was to protect the faith of my own children. Exposure to truth is the key to maintaining faith and the Digger Doug series of  fun and animation is a great tool to help your children love discovering truth. So I’m all about Digger Doug, Iguana Don, The Singing Sycamore Tree, Willy the Word Worm and what’s happening at Dave’s Diner. In fact, some of the stuff happening at Dave’s Diner and around that Sycamore Tree and in the studio with Willy the Word Worm may end up helping your kids to the Bread of Life, and the Tree of Life, and the Word of Life. That could be some pretty amazing episodes!
(Oh yes. My favorite character on episode seventeen is Cole Coal. Can’t put my finger on it, but I like him. Next favorite is Willy the Word Worm.)

The Adventures of Digger Doug is available at www.colleybooks.org.

Posted on December 4, 2009
…And while we are speaking of Apologetics Press, let me tell you the holiday project from AP about which I am most excited. It’s a brand new, just-being-released CD called Digger Doug’s Underground Rocks. It’s not your usual kids worship songs. In fact it’s not worship songs at all. It’s a rocking CD about science and it gives your kids the basics for refuting the theory of Organic evolution in pumped-up, imaginative “School House Rock” style tunes. It’s about the fossil record, the second law of thermodynamics, the design/designer principle, and just tons of stuff your kids will learn without the pain of learning. This is the CD that Digger Doug and Iguana Don fans are going to devour. I’m not sure of the exact date of release, but you can find out at the AP website listed in the previous post. You can also get it at Colley Books.

And when you get it, if you listen carefully, you can hear Yours Truly in the back up section of at least one song (and that was great fun)!  I wish I had been able to play this CD in the car when my kids were growing up. I’m getting a copy for my SUV anyway. Be impressed when I’m able to talk intelligently about geology (in rhymes) in a future post.